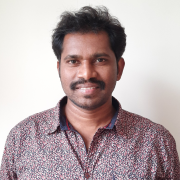 Here is an example of a switching effect interactivity.

The smooth animation effect of the buttons makes the learner actively participate in the quiz.

Let’s see how to create such an interactivity..

Create a button using shapes and apply two Motion Path animations to it. For the first click, the value of the variable becomes True and for the next click the value becomes False and so on. Using this change in values, we should adjust the movement of the button (Oval 1).

Create two states for the button (Oval 1) to appear as selected/deselected when clicked.

To make the button act like a switch, we need to link the button with triggers. Until now we just created the button and assigned animation paths and added states.

Now let’s create triggers to make the button move from the left to right and right to left when it is clicked.

Create the following triggers as shown below. These triggers will move the button when we click it.

Now, let’s create triggers to change the color of the button when it is clicked.

Observe the triggers with different conditions in the two screenshots. We can have any number of buttons as per our requirement and assign individual variables for each button.

When we preview the slide, the output looks like this. You can watch the output here

Hope you like this new spin on True/False questions.

Have you customized such new interactivities in Storyline? Do share your experiences with us.